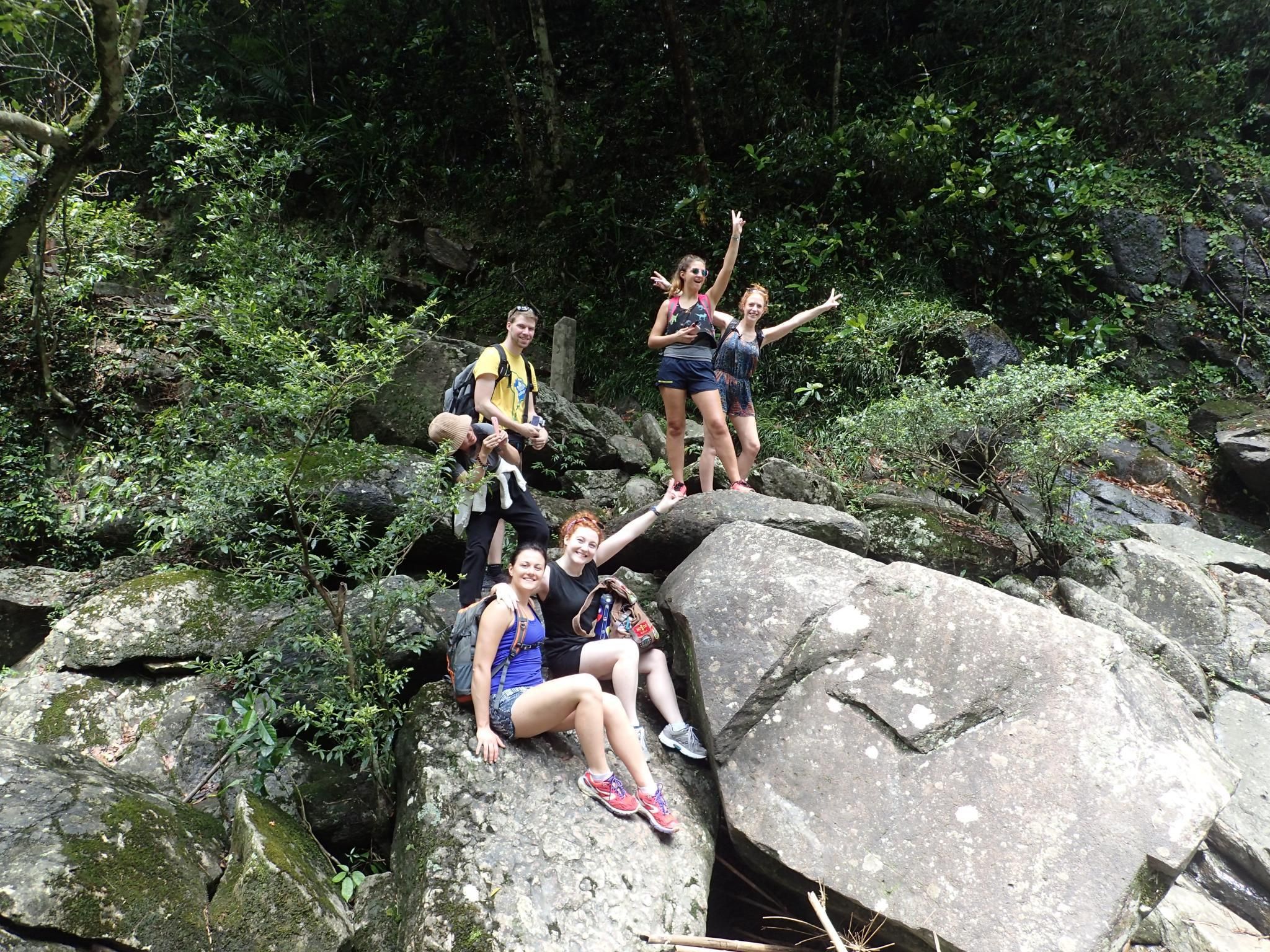 Visit the ghost villages of the New Territories.

Fee for this tour: HKD 290 per person, HKD 250 children 3-12, including taxi from Fanling MTR to Luk Keng and boat from Lai Chi Wo to Ma Liu Shui.

For hundreds of years, the area what is now Hong Kong was occupied by mostly Hakka clans, living in villages scattered all over the countryside and on most of the outlying islands. These people lived off farming and fishing, while some villages were also into salt making (e.g. Tai O, Lantau; Yim Tin Tsai, Sai Kung and another in Tai Po), lime burning (Peng Chau; Hoi Ha, Sai Kung) or even the production of high quality pottery (Wun Yiu, Tai Po).

All of these industries have come to an end with the industrialisation of Hong Kong, most notably from the 1950s to the 1970s. Farming lasted until early 1970s, when cheap imports from the mainland and the prospect of better jobs in the factories in the city made farmers leave their ancestral lands. Fishing is the one industry of yonder that is still surviving, albeit by a thread.

The villagers in what is now Plover Cove Country Park were mostly farmers. Around 1970 business was booming: the population of Hong Kong growing and all these people had to eat. However just a few short years later the produce prices collapsed, and by the mid 1970s most villages were empty. Some abandoned quite literally overnight amidst ghost stories. To this day, pallets full of brand new bricks and roofing tiles are sitting in those villages, still waiting for the construction of new homes.

This tour of the villages starts at Luk Keng. From there we walk by Kuk Po, a mostly abandoned village, home to just a handful of people now.

We follow the shoreline to the far end, where we find Yung Shue Au. One of many previously thriving villages, it is now completely abandoned. Its heydays were in the 1960s when British border patrol soldiers were housed there, tasked with protecting Hong Kong's sea border. When the soldiers left, the only bar of the village closed soon after due to lack of business. A few years later the village was completely abandoned. We will take a rest at the main village square. Maybe the echoes of the voices of the people can still be heard here... or are that just ghosts whispering?

Half an hour further is So Lo Pun, also abandoned, however not forgotten. The villagers are talking about repopulating their old home. Permits for over 100 village houses have been issued. Now if these houses will ever be built, or who would want to live there, is not known. There is no running water, no electricity, and no road access. The only thing this village still has is an active village head, who returns to the village frequently and has even started a mandarin orchard on his ancestral lands.

Another half an hour of walking through the forests and we arrive at Lai Chi Wo, the end of the hike. In it's heyday home to at least 3,000 people, and the most important village of the area. Now it is home to no more than a handful of elderly people, who have lived their whole lives in the village. A very well preserved Hakka village, a great example of how many such villages would have looked like. The fung shui woods are home to at least 100 species of trees and many different animals, and are considered to be of special ecological and scientific interest.

The villagers have always fiercely protected their woods. When the Japanese occupiers came to chop down trees in the area, they also tried to take the trees from the fung shui woods, only to be kicked out by the local villagers. The five-fingered camphor stands witness to this, it's missing finger having been lost to the Japanese.

About every ten years a major festival is held here, and all the indigenous villagers and their ancestors - most of whom do not live in Hong Kong any more - will return and gather at Lai Chi Wo. The latest festival was in 2010, the next will be around 2020.

A geoheritage centre has been set up in Lai Chi Wo to showcase the rocks of the sedimentary rock region of the geopark.

Here we'll also have lunch - on offer is a traditional "pun choi" or "poon choi" feast, a big bowl with many kinds of meat and vegetable. Please mark this when booking as it has to be ordered in advance (not included).

After lunch there will be time to explore the village and the agricultural land around it, before catching the boat at 15:30 to take us back to Ma Liu Shui (near University MTR station). This 1 1/2 hour boat ride passes by special rock formations such as the "emperor's seal" and the "devil's fist".

9:00 meet at Fanling MTR station (outside Exit C), take taxi to Luk Keng where we start our hike.

Yung Shue Au, all but forgotten about.

So Lo Pun, where compasses are said to go haywire.

Visit the Fung Shui woods and the Geoheritage Centre.

This is a moderate intensity hike of about 9 km, mostly using well maintained dirt footpaths. We'll have a late lunch at about 13:30, bring some snacks for on the way. Bring sufficient water, there is nothing available until we reach Lai Chi Wo (about four hours in).

Fee for this tour: HKD 290 per person, HKD 250 children 3-12, including taxi from Fanling MTR to Luk Keng and boat from Lai Chi Wo to Ma Liu Shui.