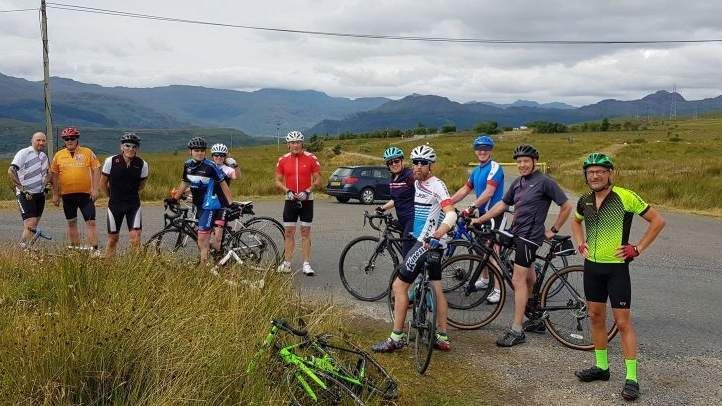 The Bealach is the UK’s biggest road climb with an ascent of 626m from sea level in just 10km. It is set in a fabulous unspoilt landscape with outstanding views of the sea and hills. The Applecross Peninsula is renowned as a gem in Scotland’s crown of natural wonders. The idea of a sportive belongs to local cycling legend Clifford Davidson.

The event was first run in the summer of 2006 and it was immediately obvious that had captured the imagination of cyclists of all standards. Shortly after, due to demand, we introduced a 2nd shorter option which also included the opportunity to climb the big one! Bealach Mor retains the original route of 90 miles and the Bealach Beag introduced a shorter distance of 43 miles.

The route will take you east from Kinlochewe near beautiful Loch Maree to the wide canvass of Achnasheen and its surrounding hills. From there you head south on a fine new road down through Glen Carron to the sea at picturesque Lochcarron. Things get tough now as the road swings sharply upward for the main climb to Bealach-na-Ba. The section of road from Tornapress up the Bealach and down to Applecross campsite is closed for the event.

The reward is great as a massive vista over the west coast and the Isle of Skye opens before you as you plunge down to sea level again at Applecross. The hard work is not over as the next section around the north of the peninsula has hardly any flat as it clings to the coast, past rocky cliffs and sandy coves. Finally you pass the charming village of Sheildaig nestling in the shelter of its loch and the final section begins. Weary legs will be revived through rugged Glen Torridon overshadowed by the massive craggy bulk of Liatach and its sisters on the famous ridge. Finally, relief is at hand with a gentle descent back to the finish at Kinlochewe.

Link for Entry - http://www.handsonevents.co.uk/bealach-mor/
Cost is £45

Posted for Richard by Alex