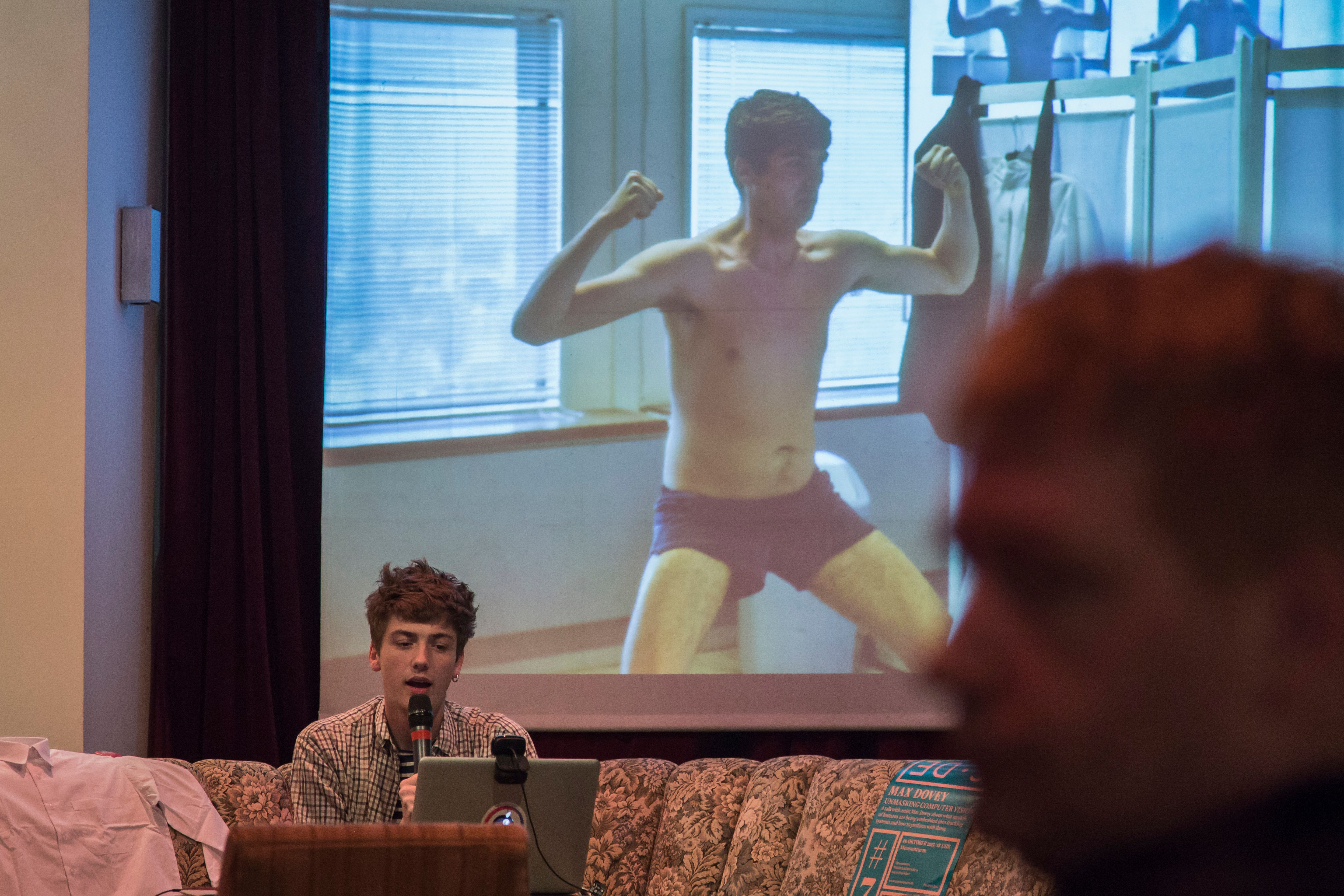 In a combined 9th and 10th edition of NODE+CODE, we will be discussing the role of the human body in new music performances. In two lecture concerts, STEIM researcher and musician Andi Otto (aka Springintgut) (http://andiotto.com) and the UdK Berlin based research group 3DMIN (»Design, Development and Dissemination of New Musical Instruments«) (http://3dmin.org) will present their findings and new musical instruments. In a conversation with NODE15 (http://node15.vvvv.org/) curators Jeanne Charlotte Vogt and Alexandra Waligorski, they will be investigating the corporeality of the instrumental. Which significance do instruments have for musicians themselves and the audience in times of the digital creation of sound? Do we still have to consider virtuosity as a category to evaluate the relationship between a musician and his/her instrument?

NODE+CODE is an initiative by basis Frankfurt and NODE Forum for Digital Arts, supported by Stiftung Polytechnische Gesellschaft and the professorship for visual culture (Prof. Dr. Verena Kuni) of the Goethe University Frankfurt.

Andi Otto is a composer and performer of electronic music based in Hamburg, Germany. He records his music as Springintgut (https://www.facebook.com/Springintgut). He has released four albums as well as various singles, collaborations and remixes on international labels.

On stage, he plays a unique sensor-extended cello bow which he has developed in collaboration with STEIM in Amsterdam. This instrumental system which he calls Fello (http://andiotto.com/fello) allows for gestural performance of the electronically processed sounds of the amplified cello. Andi Otto regularly composes for theatre and dance performances in which he also appears as a performer. His work has taken him around the world, most recently to India, Nigeria and Japan.

Andi Otto is also one of the founders of the Pingipung (http://www.pingipung.de/) label and as a DJ he hosts a regular night at Hamburg's Golden Pudel (http://www.pudel.com/) Club. He is a member of the Flinntheater (http://flinntheater.com/) Collective from Berlin. He is currently completing a PhD thesis about the STEIM (http://steim.org/) SensorLab (a pioneering device for physical interfaces in electronic music from the 1980s). He teaches at the HKB in Bern (Music and Media Art), Leuphana University Lueneburg (Cultural Sciences) and Humboldt University Berlin (Musicology).

Amelie Hinrichsen is a Research Associate in the Einstein research project 3DMIN (Design, Development and Dissemination of New Musical Instruments) at the Berlin University of the Arts. After accomplishing an apprenticeship as a carpenter she completed her studies in Product Design at the Berlin University of the Arts in 2012. With her final project she won the DMY Young Talents Jury Award in 2013. After working as a freelancer for Friedrich von Borries she joined the 3dmin Team in 2013. Amelies work ranges from film over product- to interface design. It reflects her interest in combining theoretical research with a practical approach, always physicalness and personal experience in focus. Currently she is working on her dissertation dealing with „Attitude and Posture – Performing Life with electronic musical instruments“.

Dominik Hildebrand Marques Lopes has a degree in audio and video engineering from the Institute for Music and Media Düsseldorf. Furthermore he studied Arts and Media at the University of the Arts (UdK) Berlin, focusing on multichannel sound installations, improvised electronic music, building kinetic/cybernetic (sound-)objects, musical recording, and live-coding. He also holds a “Meisterschüler” (distinguished graduate) degree in Arts and Media. Currently he is working as a Research Associate in the Einstein research project 3DMIN (Design, Development and Dissemination of New Musical Instruments) at the Berlin University of the Arts. He is also lecturer at University of the Arts Bremen (Digital Media).As a computer musician, his main focus is on developing and performing with physical musical interfaces whose constraints and functionality are chosen to exhibit unique behaviour (or life of their own) arguably equally rich as many acoustic instruments. This approach leads to very direct bodily control of computational processes which hopefully can also be experienced as such by the audience. Dominik is a member of “Trio Brachiale”, “Republic111”, and the “Society for Nontrivial Pursuits”.

Since the beginning of 2014, Till Bovermann is a post-doctoral researcher at 3DMIN (Design, Development and Dissemination of New Musical Instruments), an Einstein research project between the Berlin University of the Arts and the Technical University Berlin. From 2010 to 2013, he worked as a post-doctoral researcher on tangible and auditory interaction at Media Lab Helsinki, School of Art, Design and Architecture, Aalto University, Helsinki, Finland. He completed his PhD in Computer science in the natural sciences on Tangible Auditory Interfaces at the Ambient Inteligence Group of Bielefeld University, Germany. Till taught at various international institutions, among others the Institute For Music And Media of the University of Music, Duesseldorf; the Department of Media of Aalto University, Finland, and the Institute for Time-based media, UdK Berlin. His art works are mostly concerned with the relations of art and science, noise and harmony, nature and artificiality. Alongside his academic and artistic work, he also develops software in and for SuperCollider.