Hosted by
John G and 2 others 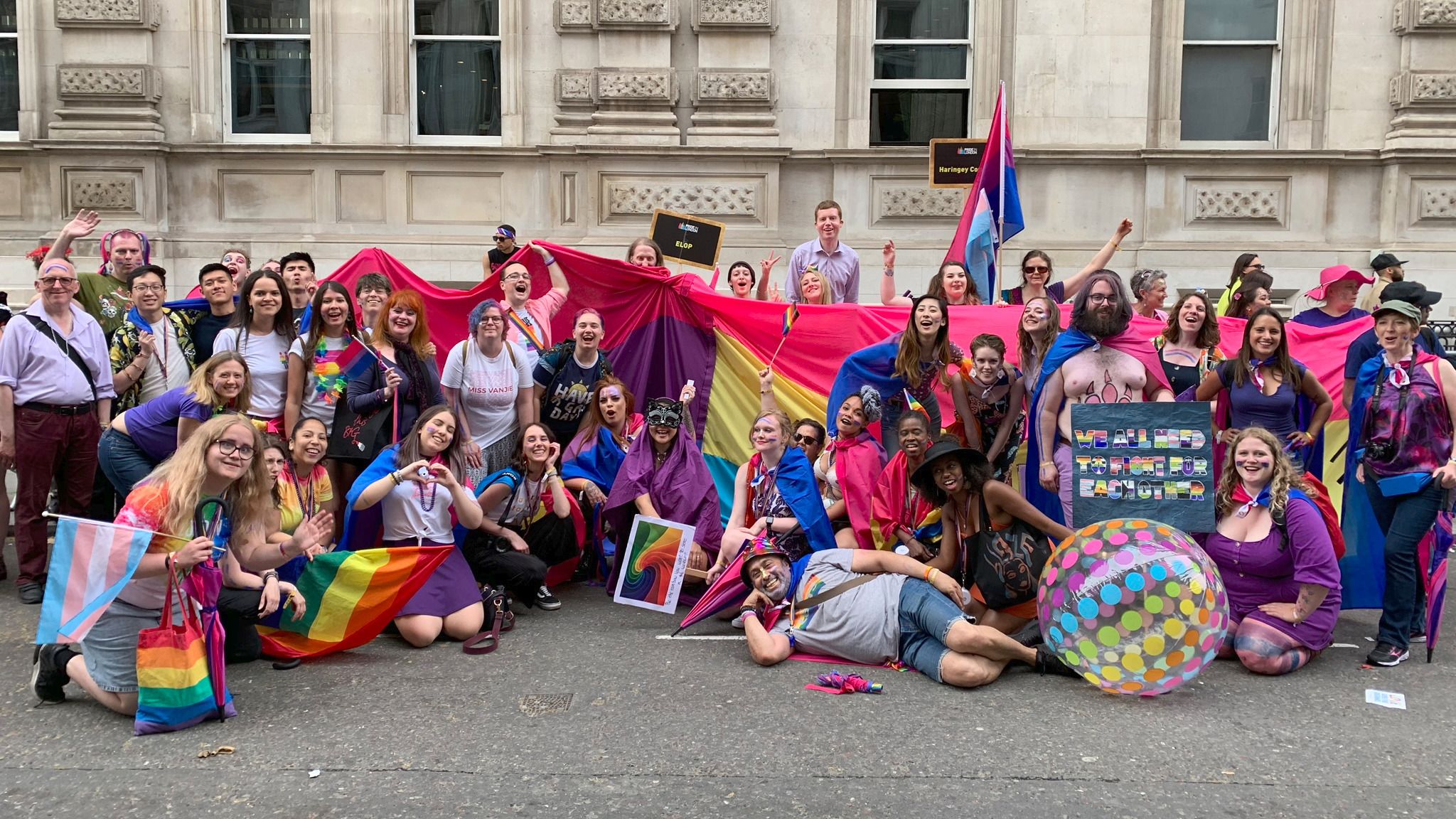 3 smaller bi groups (exponential growth since 2017!), & Bi Pandas' float (2nd ever) are near the front. We're near the back, no float but everything's huge: the group, flags, guests, banners, sound! You'd notice us wherever; stick around! We're gonna be #*^%ing visiBle and audible!

*Lots* of details below: pick & read _now_, the sections (titled with #s) relevant to you, other info may be useful later. 'FOR ALL' at the bottom is for _everyone_, please read for your best day out!

Parading is exhilarating, self-affirming, confidence-building. Make new friends, too. Whether Bisexual, Pansexual, Polysexual, Queer, Fluid / similar, or ally, JOIN US! We're at least 50% of LGBTQIA+ community; we will show that & be damn visiBle in 2019 (#20BiTeen). Its also Stonewall's 50th anniversary, #PrideJubilee. Bisexuals were there at the very start!

To march, you'll need a parade wristband, via us, on the day at the meet point, not before. Follow the code of conduct (basically: don't be a dick/drunk/...): http://prideinlondon.org/codeofconduct/
We can be removed for misbehaviour. Be responsible!

* Bring placards, (bi/other) umbrellas, your voices, a mask/hat to hide under if needed etc. We have bi stripe facepaint. Also flags for sale.
* Wear purple/pink/blue (bi colours), or pan colours if you can; or a Bi Pride UK/Bi Pandas T-shirt! Or whatever!
* Prepare for 3-4½ hours of stopping/starting in all - no seats. But it goes by faster than you think! You can escape for emergencies, but aren't allowed back in once we start.
* If late, call/SMS/tweet DM!

* 11.40am on (optional but recommended): To see other bi groups+Pandas black/white float (only chance?), walk the parade area from front on Portland Place before coming to Regents Park (don't lose track of time, recruit more for us!).
* 12pm: Front of parade starts
* 1pm on: Find the team at the meet point. See map/aerial photo.
Check-in for a wristband (or if full, a ticket, first come first served for later spares). Chat, prepare, help others, eat snacks/lunch etc.
Call/SMS/comment here if can't find us.
* 1.45pm onwards: spare wristbands given out (from priority list no-shows) for tickets, in order, then to anyone else.
* ~2pm: all walk to our parade start area, section K, #70.
More preparing, makeup, sunscreen etc.
Latecomers may join by arrangement (wristband needed to enter), call/text first!
* 2.55: Last entry to our group.
* ~3.45-4:20: start parading. Lots of stop/start walking.
* ~[masked]: finish (estimate). The route takes 1.5-2 hours to parade.
* Group photos, selfies!
* Exit to parties/watch more/home/chill.

Some parade wristbands are prioritised (as long as you're on time). We will have quite a lot left for the rest of you, first come first served.

To join priority wristband list, either:
* donate £5 card/cash/paypal at an event/buy same amount of raffle tickets if a prize draw
* donate via ko-fi at https://ko-fi.com/londonbimeetup (£5/more), until end of Friday. Ideally message me here/elsewhere to say so too.
* if in financial hardship, ask John/other core team members for one ahead of time (our accessibility fund may help with other costs if given notice).

# Marching: In the Parade:

During the parade, abuse from crowds is now rare, people just have love to give - high-fives, cheers, whoops, whistles, sometimes hugs even.

Once parading, you can leave (eg. for emergencies) but not rejoin. We cannot wait for you as we must be in position. You may not be able to join us if you miss us at the assembly point (we'll try tho).

Take video/photos but don't forget to enjoy it! Hide under facepaint/hats/sunglasses/umbrellas/a mask/behind banners or placards if you're still getting used to being so out.

The crowds cheering us on get bigger at the end - you might feel like a superstar with all the cheers, cameras, thumbs up, and high-fives on offer. It's improved my confidence every year I've done it (I was nervous the first time - don't let fear of the unknown stop you!).

We finish just beyond Trafalgar Square. You'll continue to the exit (breakout) point via Whitehall onto Whitehall Place - see the route on the Pride website (https://prideinlondon.org/parade/map).

I recommend exiting via Scotland Place onto Great Scotland Yard to avoid some crowds, then join the post-parade picnic or see other options below.

Watching along the route is easier & allows visits to shops/cafes to refill or sit etc. The start is less busy. Arrive early for a good spot. I'll announce here + twitter where to see us - look for flags/banners in bisexual colours (pink, purple, blue), purple outfits (though others also wear purple), or the pan colours (hot pink,yellow,light blue).

Oxford Circus & Regent Street are the busiest+noisiest, can be 10-deep rows of people on both sides - hard to move along and follow any group there (arrive early!).

Check out groups near the huuuge Stonewall rainbow flag at front. No, really! Its #20BiTeen!

Our group is (annoyingly) near the back, but with huge bi and WORLD-FIRST pansexual pride flags, plus star guests, bi umbrellas, sound, and banners, but there will be other bi+ people and allies too elsewhere - cheer them all on, maybe chant some "bi! bi! bi!", wave, offer high-fives ("bi-fives!") if near the barriers?

The parade finishes by the square, with stalls and big stage acts.

Either miss initial rush to get in, or queue before it opens at ~ noon; two entrance gates at the top (both sides of the square), exit-only at the bottom. Charing Cross station is nearest+easiest.

A few of us will probably be in the square - see comments on this event. Watch the stage around 3.30!

Check out the #CommunityVillage in Soho Square. Greener+quieter than Trafalgar. Monroe of Bi Pandas performs drag there (3.30?), Marcus also later(?). No bi stall.

Bring (bi) umbrellas/ sunhats/ sunscreen/ face paints/ water/ snacks depending on weather; maybe a small kit of things to fix outfits/help others. Theres a lot of standing around.
*Look after hydration/blood sugar* (obtain liquids AHEAD OF TIME)!

Dress up wild, decorate yourself, hide behind layers, or don't - but consider practicality - a hot day, lots of walking. I have NEW! Pride bi face paints I can sell/share, & (biodegradable) glitter.

Some stations close/exit-only. You can't park near (no parade group parking).

Check your route, give _plenty_ of spare time.

Phone numbers (SMSs best in parade/crowds; be patient) is in location details.

Comment/message here, read/tweet/DM @londonbi - for updates/Q's. Be patient/leave messages/texts - calls may be hard to hear (crowds,noise). Remember this group is public, before sharing personal phone numbers for all to see.