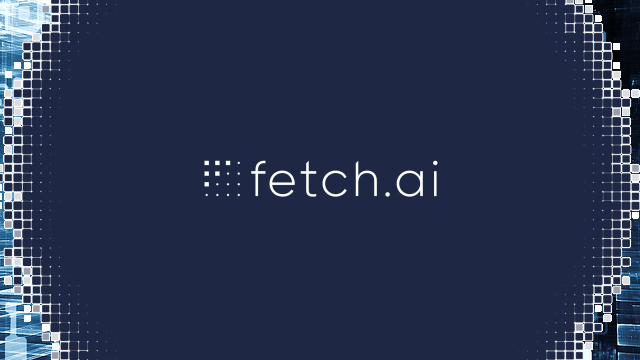 Please head to WeWork on the 4th Floor to find us

Are you a developer or enthusiast who’s interested in how the combination of AI and distributed ledger technology is changing the world? Join us to learn more about the Fetch Virtual Machine and how people can design, write, deploy and earn rewards from Machine Learning and AI algorithms on Fetch.

The Fetch.AI team have built the world’s first adaptive, self-organising ‘smart ledger’. This is the foundation for a next-generation digital world where Autonomous Economic Agents can perform proactive economic activity, powered by a collective intelligence. Fetch is the missing critical infrastructure for tomorrow’s digital economy.

Fetch.ai has already been included in the MOBI consortium of major automotive brands including BMW, Ford, GM and Renault, which is focused on setting standards for distributed ledgers in areas such as vehicle identification and autonomous vehicles.

Join us for an evening of presentation and discussion. The focus of this event is the Fetch.AI Virtual Machine and deploying algorithms on Fetch, join us to learn about:

*The Fetch Virtual Machine and its custom language
*Smart Contracts on Fetch and how they differ to Ethereum
*How to design, write, deploy and earn rewards from running ML and AI algorithms on Fetch
*New Fetch partnerships in this area

Humayun Sheikh, CEO, Fetch.AI
With his fourth major venture, Humayun is the founder, backer and CEO. Fetch.AI. Humayun is a true entrepreneur and visionary. His first venture bought an entirely new way of thinking to the steel recycling sector, building his company Metallis from start-up to £40m in six years. He was a lead investor in DeepMind, having the vision to provide early-stage support to artificial intelligence & deep neural network technology. DeepMind was ultimately acquired by Google for $500m in 2014. In addition, he was an early investor in PLUMgrid, the cloud solution provider. Humayun studied nanotechnology at Cranfield University and considers Blockchain, AI and Machine learning as his key focus points in the near future.

Toby Simpson, CTO, Fetch.AI
Toby has thirty years' experience in software development with ten as CTO across three companies. As a software developer and manager, he’s built and directed many successful computer games across several platforms including producing the highly regarded Creatures series in the 90s. More recently, he was one of the original developers at AI company DeepMind, acquired by Google in 2014, looking at nature’s contribution to artificial general intelligence.

At Fetch.AI, he’s using his knowledge of managing software complexity and distributed, decentralised problem solving to architect and deliver the next generation of economic software agents and the environments in which they live and thrive: converging digital intelligence with cryptoeconomics to build a fairer, more efficient and seamless future economy.