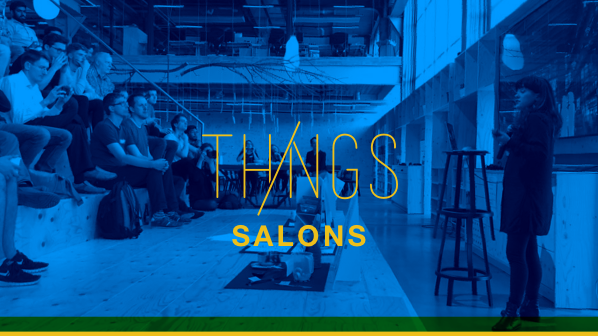 End of January the Amsterdam Fashionweek will take place again. A good moment to plan a ThingsCon Salon focused on the developments in connected fashion, new materials, and the consequences of the new intimate interfaces. The ThingsCon FashionTech Salon.

In this meetup we invited speakers that are active in rethinking fashion influenced by new technologies, both from university labs as from fashion designers and makers. In this meetup we will have talks and we will provide demos of new materials.

The program of the evening:

Anja Hertenberger is an artist and researcher working with the medium of wearable technology and e-textiles. In these fields the relationship between body, technology and environment takes centre stage. Anja researches with her work body and identity in relation to media, surveillance, power, control and man-machine interaction. The research she does is visible in interactive installations, performance art and e-textiles. She teaches interactive design and interactive textile, curates for the Media Art Festival Friesland and has co-organized the SOFT symposium at The Royal Academy of The Hague in the Netherlands. She is one of the main developers of the e-textile / wearable technology lab ‘WEtec (https://weteclab.wordpress.com/about/)’ recently implemented at the Royal Academy of the Hague. Her artistic work has been exhibited in Singapore, Germany, The Netherlands other European countries.

Aduén Darriba Frederiks is an interactive media artist (http://aduen.nl) and researcher in wearable technology. He has a background in Information Technology and holds a Master of Art in European Media. The combination of technology and art has been a drive since 2008 when he started to collaborate with Fashion Designers. At that moment highly influenced by robotics from his work on animations for the NAO H25. Today he is a recognised engineer and artist in the field of Fashion and Technology.

Eef Lubbers MSc is an industrial designer working at the intersection of technology, textile and fashion. With an explorative approach she aims to combine new fuctionality and aesthetics, transforming mostly rigid electronics into soft and delicate structures.
Previous works include Unlace, interactive lace lingerie that seems to dissappear by touch, and Kimbow (https://vimeo.com/129483770), a dress which amplifies body language through movement in colour. With her work, Eef shows concepts that add value to our daily lives and are designed to be wearable.
Besides projects, talks and guest lectures, Eef is working at Manus VR, a company developing virtual reality gloves. There she faces the challenges of combining technology and textile in a way which can be industrialized.
Eef will show and present the Kimbow dress at the Salon.

Edwin Dertien graduated from University of Twente in 2005 with a MSc in Mechatronics. He continued research at the same group on the design of a pipe inspection robot and completed his Ph.D. in 2014. He has a fascination for robotics, and has worked on several projects involving (autonomous) robots, both from an engineering or artistic interest.
Since 2006 his company 'Kunst- en Techniekwerk' (making art work) has been providing the technical backbone in art-projects, ranging from robot-arms for sci-fi movies to autonomous GPS track drawing robots also realising various autonomous art works, big moving sculptures and weird installations for festivals and expositions.

Edwin will show the AWE Goosebumps (http://sensoree.com/artifacts/awe-goosebumps/) design, a project together with Kristin Neidlinger SENSOREE.

The meetup will take place at the Westergasfabriek complex, in Amsterdam Flavours (http://amsterdamflavoursexperience.com/locatie-2/). A very nice location, and in the middle of the Fashionweek. We will serve drinks and some finger food.
Amsterdam Flavours is at the beginning of the street running between the buildings, next to North Sea Jazz club and opposite Ketelhuis. (Google Maps points out another location on the map).

This meetup is supported by: