Hosted by
Bård A. 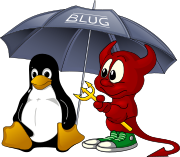 MPEG played it a little smarter than SEA or CompuServe. Threatened
lawsuits never happened; they simply hung in the air like the
Sword of Damocles, poisoning the market waters. As intended, this
boxed out the Free MP3 encoder projects, the people directly
responsible for MP3's growing success. And the rest of the world
mostly continued treating MP3 like a 'free' format and mostly
didn't get sued. Mostly.

But the Free codec hackers did not forget, and thus far we choose
not to forgive.

I present recollections, technical asides, and unsubstantiable
gossip in an intentionally one-sided history of the codec
wars. From the early days of LAME to the dawning story of the new
AV1, come hear about the tactics and maneuvers of Free codec
development.

has been professionally active in audio and compression since 1993.
He founded Xiph.Org in 1994 and began the Vorbis codec in 1998,
shortly after Fraunhofer IIS and Thomson Multimedia threatened legal
action against FOSS MP3 encoder projects.

Over time Monty and Xiph.Org have developed or contributed to
other Free and Open Source codecs such as Speex, FLAC, Theora,
Daala, CELT, Opus, and AV1. Monty's other software includes
CDParanoia and Postfish, and he's contributed to Audacity and
Cinelerra in the service of musical theater, video, and stage
production.

Monty holds a B.S. in Electrical Engineering and Computer Science
with a concentration in music from the Massachusetts Institute of
Technology and a M.Eng. in Computer Engineering from Tokyo
Institute of Technology. He is currently a research engineer at
the Mozilla Corporation, where he works on digital media
standards.