Hosted by
Matthew E. and 3 others 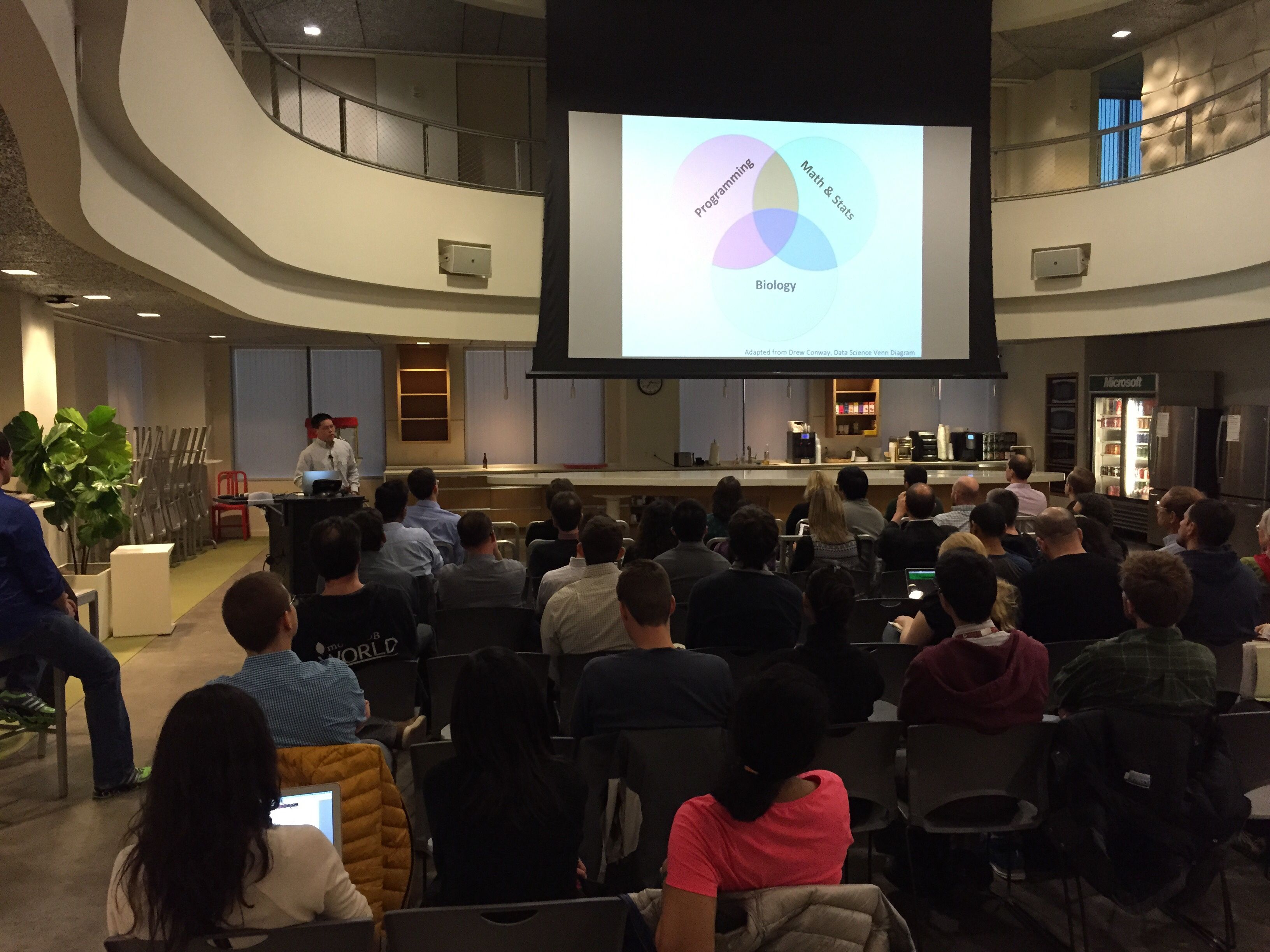 When you enter one mem drive, sign in with the security guard who will then let you through the gate. We'll be in the Commons space on the 11th floor.

BCBB is excited to announce the 6th installment in our seminar series. September 20th at 5:30PM, join us in the incredible Microsoft NERD Commons function space for free pizza, a cash bar, all your friends from BCBB, and 2 very exciting speakers. This month's event is sponsored by Seven Bridges.

To get into the NERD space, show a photo ID at the front door and ask for directions to the Commons room.

This month BCBB is very proud to be handing the mic and projector over for two very interesting talks from prominent local computational biologists.

John F. Staropoli, MD, PhD, Associate Medical Director, Rare Disease Innovation Unit at Biogen, will be giving a talk titled "Spinal muscular atrophy and the power of human genetics in molecular medicine". Spinal muscular atrophy (SMA) is an autosomal recessive neuromuscular disorder in which progressive motor neuron degeneration leads to weakness and atrophy of primarily proximal skeletal muscles. The underlying genetic defect is loss of function, usually deletion, of survival motor neuron 1 (SMN1) and is the most common monogenic cause of infant mortality. A neighboring gene centromeric to SMN1 at chromosome 5q13, SMN2, arose from duplication and subsequent mutation of SMN1 and is unique to humans. The pre-mRNA of SMN2 is the target of an antisense oligonucleotide currently under clinical investigation with promising results to date.

Nicolo Fusi, PhD, Research Scientist at Microsoft Research, will be giving a talk titled, "Machine learning for CRISPR gene editing" The CRISPR/Cas9 system provides state-of-the art genome editing capabilities. However, several facets of this system are under investigation for further characterization and optimization. One in particular is the choice of guide RNA that directs Cas9 to target DNA--given that one would like to target the protein-coding region of a gene, hundreds of guides satisfy the constraints of the CRISPR/Cas9 Protospacer Adjacent Motif sequence. However, only some of these guides efficiently target DNA to generate gene knockouts (i.e. have high on-target efficiency) and some of these might have unintended (i.e. off-target) effects somewhere else in the genome. In the first part of this talk we present a state-of-the art predictive approach to modeling which RNA guides will effectively perform a gene knockout by way of the CRISPR/Cas9 system. In the second part of the talk, we will briefly introduce some ongoing work on a new machine learning approach to predict to severity of the off-target effects for a given RNA guide.

A big thank you to Seven Bridges for sponsoring this event.

About our sponsor Seven Bridges:

Seven Bridges is the biomedical data analysis company accelerating breakthroughs in genomics research for cancer, drug development and precision medicine. The scalable, cloud-based Seven Bridges Platform (http://www.sevenbridges.com/platform) empowers rapid, collaborative analysis of millions of genomes in concert with other forms of biomedical data. Thousands of researchers in government, biotech, pharmaceutical and academic labs use Seven Bridges, including three of the largest genomics projects in the world: U.S. National Cancer Institute’s Cancer Genomics Cloud pilot (http://www.cancergenomicscloud.org/), the Million Veteran Program (http://www.research.va.gov/mvp/), and Genomics England’s 100,000 Genomes Project (http://www.genomicsengland.co.uk/). As the NIH’s only commercial Trusted Partner (https://gds.nih.gov/02dr2.html), Seven Bridges authenticates and authorizes access to one of the world’s largest cancer genomics dataset. Named one of the world's smartest companies by MIT Technology Review, Seven Bridges has offices in Cambridge, Mass.; Belgrade; London; Istanbul; and San Francisco. We are growing our team and have openings for Bioinformatics Scientists, Scientific Project Managers, and R&D Engineers.