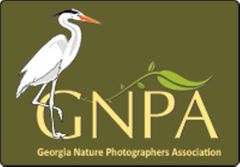 
We are a regional chapter of Georgia Nature Photographers’ Association. In addition to meeting monthly for an instructional program, we schedule meetups to provide opportunities for nature photographers who live in the central Georgia area (Henry, Fayette, Bibb, Lamar, Monroe, Pike, Upson, and surrounding counties) to meet together to learn about nature photography and to have opportunities to experience it with others. We meet every FIRST Tuesday of each month, except December, in the Griffin Senior Center, 885 Memorial Drive, Griffin, GA, 30223.

Have you ever wanted to go photograph wildlife at the local park, but wondered what was there? Did you ever back out of a trip to the Smoky Mountains to photograph the Elk or Bears because you weren't sure you could do it? Have you ever been hesitant or nervous to book that trip of a lifetime to photograph Brown Bears in Alaska because you didn't know where to go, or how to prepare? Join Professional Nature Photographer and Workshop leader, David Akoubian, as he shares some tips, settings, stories and images on how to scout, prepare, and photograph wildlife near and far. David will share with you how he scouts prior to ever arriving in a location, as well as how he practices before he leaves. He will talk about his preferred gear and settings to increase success when photographing in the wild. He will share lots of images from his recent trips to Alaska and how quickly photographing the Brown Bears became second nature. Come be inspired, and walk away with knowledge on how to improve your wildlife photography...both near and far.

We are pleased to welcome David Akoubian to present this program to our chapter. David is a well known nature photographer based in the mountains of North Georgia. He has been a photographer since 1972 when his father presented him with his first camera, but his career in photography started in 1992. David learned his craft originally as a painter and from his father who shares his love of nature and photography. Early in his career he traveled with, learned from and taught beside some of the masters of nature photography including John Shaw, Art Wolfe, Galen Rowell, Bryan Peterson, Pat O'Hara, and Rod Planck. David has been teaching photography since 1994 in the classroom and leading workshops around the United States. David presents and leads workshops at many of the country’s top photographic conferences such as the Photographic Society of America Annual Conference, as well as many camera clubs across the United States.