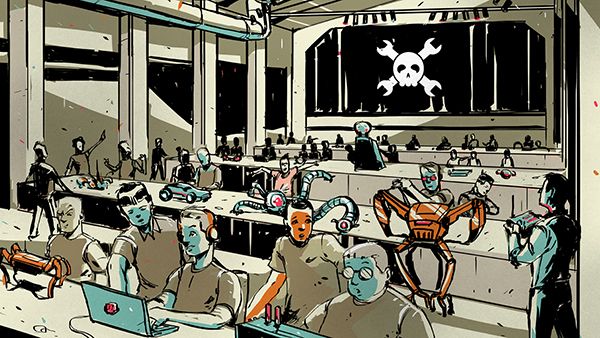 Hunter Futo - "We Shape Our Tools & Our Tools Shape Us"

What is the nature of the relationship between humans and their tools and why do we form such strong emotional connections with them? Are they merely a way to solve problems and accomplish a specific objective, or do they also help us to understand our place in the world and move culture forward? Now that our tools are becoming increasingly embedded with technology, we need to be more mindful about their design. How can we design tools to enhance our own creativity by making them easier and more fun to use?

Hunter is an LA-based wearable technology and tangible interface designer, and Supplyframe DesignLab Resident Alumnus, whose work explores the physical and emotional boundaries between humans and machines. As a former content producer and user experience designer for screen-based interfaces, she now designs and builds embedded devices that seamlessly blend our virtual and physical realities.

Diego Porqueras - "Crowdfunding: the Good, the Bad, & the Ugly"

Diego Porqueras is the President and Founder of Deezmaker. He is also the inventor of the Bukobot 3-D printer which he introduced in April 2012 on Kickstarter. The project quickly raised nearly four times the requested amount, and a few months later he opened “Deezmaker” the first 3D printing store & hackerspace in the U.S. Diego has always been fascinated by making things. A summer school computer science class in sixth grade got him started, and he continued with high school metal shop, electronics, and computer programing.

Diego worked as a photographer, graphic designer and as a web developer for many years and then, in 2000, took a film class at Pasadena’s Art Center College of Design which started a new career in the film industry. He started working as a production assistant on movies and music videos and took any opportunity he could get to be on film sets. Eventually, he started working productions in the camera department as a camera tech working on films such as Jim Carrey’s “Fun with Dick and Jane”, “Children of Men”, “Burn After Reading” and other commercials and television shows. A desire to make a better camera mount equipment led him to 3D printing, and a passion for making machines better led him to go beyond the available kits to make his own.

We will have reserved time for lightning talks. You'll get about two minutes to make an announcement, demo a project, or call for project collaborators. There will be a sign-up list at the meetup.

Showing off demos and Hackaday.io projects is highly recommended. We're in the midst of The Hackaday Prize 2017, extra points if you bring your #HackadayPrize project and show us how you want to move humanity forward. Get feedback, ask for advice, or form a team to work together.

If you haven't seen the Hackaday Prize video yet, here it is:

The DesignLab is at 30 E Del Mar Blvd, Pasadena, CA. You probably won't find street parking nearby, but please see this Google map (https://www.google.com/maps/d/edit?mid=z336KXOi6I8Q.kWuP10Ksdh4Y) showing the Supplyframe DesignLab location and nearby parking structures:

Using the Metro Goldline trains is quick and easy. It takes about 20 mins from Union Station in downtown LA to Del Mar Station, which is less than 2 minutes walk from our front door. Trains run about every 10 mins during the day and 20 mins at night from 11pm-2am.

There are also buses that serve Old Town Pasadena. The nearest intersection is FAIR OAKS/DEL MAR BLVD, PASADENA, CA 91105. You can find timetables or use the Metro Trip Planner at metro.net (https://www.metro.net/)