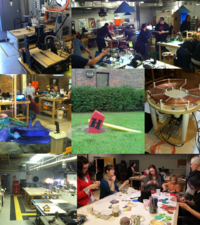 Your alone, working quietly on a project. Suddenly, you hear soft distant music playing. What is that song? Where is it coming from?

In this class you will learn to build a simple music player using Arduino. The secret music player will randomly play a part of your favorite song every few hours. Great for pranking friends, or just getting the tune from "I’m a Barbie Girl" stuck in someone’s head… permanently.

Arduino is an inexpensive and easy-to-learn combination of software and hardware that lets students, artist, tinkerers,and hobbyists add intelligence to their projects. In this class we’ll cover how to shrink an arduino project down so it fits on a single microchip. We’ll use Arduino’s low power sleep mode save power for long term operation via battery, and convert Midi audio files into arduino programming code. There will also be soldering and a discussion about how much energy is available from tiny batteries.

**IMPORTANT: Students needs to bring their own computer to this class.
We will be downloading and installing the software used to program your Arduino.

In this Three Hour class we will cover:
● Using Arduino to program an ATTiny85 microprocessor
● Soldering A ‘Deadbug’ style electronics project
● Converting Midi files to a format that works with Arduino
● The arduino Random(); function, and what we can use it for
● Using the Arduino’s Sleep function to save power

Suggested Age range for this class: 10 to Adult
Class Price: $30/person (unless you and a child are working together on one kit, then it's just $30/kit)