Hosted by
Ozan K. and 3 others 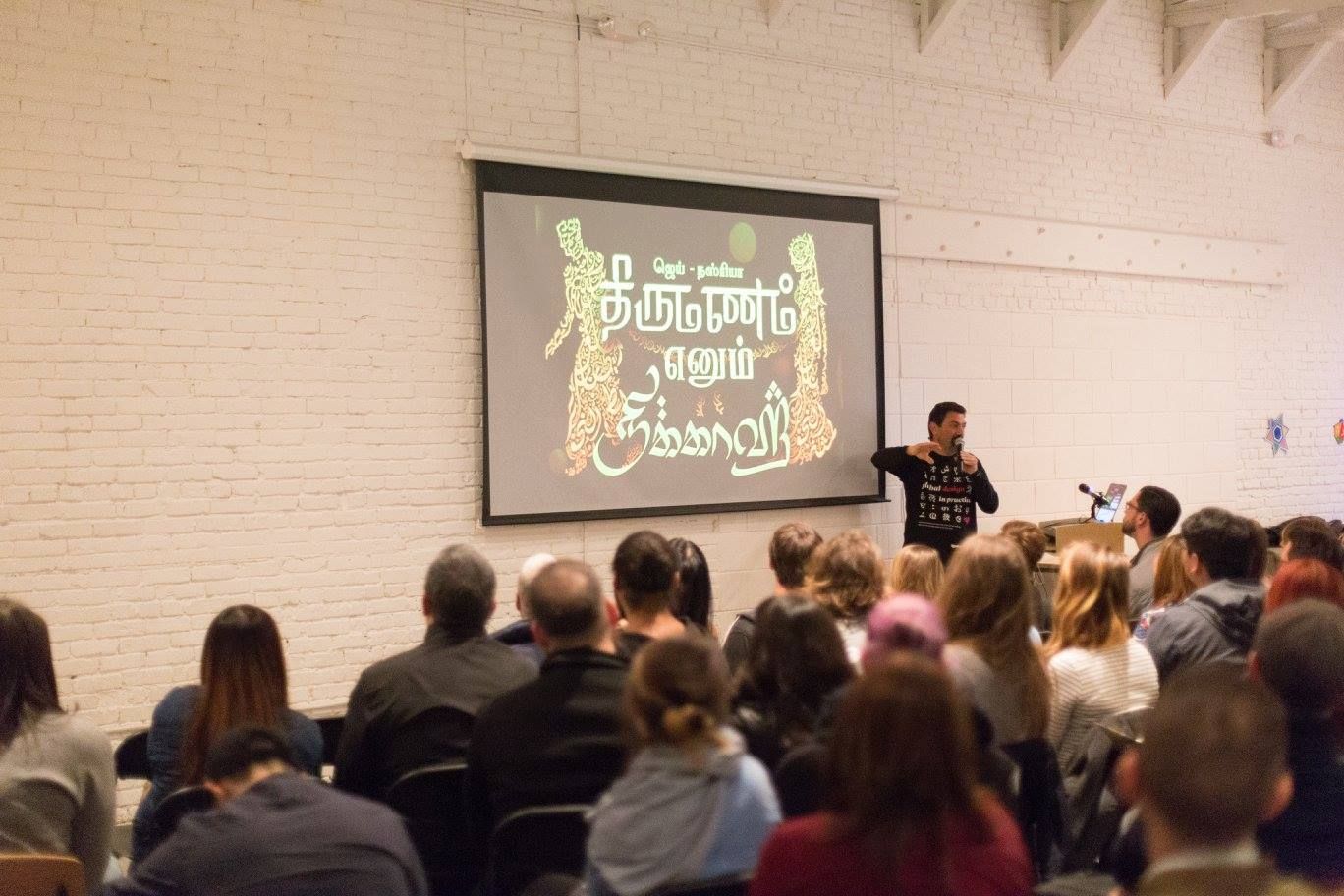 In the NEW Little Tokyo location for General Assembly on 2nd Street.

It’s our second typographic show n’ tell event, powered by PechaKucha. Presenters will speak on the topics of hand lettering, custom letterforms, packaging typography, city signage, virtual reality, the type of protests and more. PechaKucha (http://www.pechakucha.org/), or ‘chit chat’ in Japanese, was developed by Klein Dytham Architecture, in Tokyo back in 2003. It’s a simple quick-fire format – presenters show 20 images, each for 20 seconds.

Join us and our friends at General Assembly (https://generalassemb.ly/los-angeles) for a fast-paced night of type inspiration and interaction between the disciplines between budding designers and established typographers alike. A big thank you to our friends at General Assembly (https://generalassemb.ly/) in Little Tokyo for hosting and sponsoring drinks for our event! And thank you to Ticings (https://www.ticings.com) for sponsoring sweets for the event!

Join us! Just two steps and you're in!

STEP 1 Register on the General Assembly site. Tickets are FREE (thank you GA!)

STEP 2 Please RSVP here on this page to let us know you'll be seeing you there! We begin promptly at 6:40pm, so don't be late.

What will you learn about in 400 seconds? (listed in alphabetical order)

Talk is Cheap As typographers, we love to talk with our craft. But what are we really saying? Are we speaking with an honest voice? With all of the words that we create and use as people who have careers built around the core structures of communication, you would think that we would be the leaders in intentional messaging. But often, the work we see in the spotlight seems heartless, empty, and regurgitated. Jillian will encourage each of us to find confidence in our unique voices in order to take responsibility for and build community around speaking mindfully and infusing purpose into our craft.

Jillian Adel is a freelance Art Director, Designer, Illustrator and Letterer who has worked with the likes of Apple, Uber, Target, The New York Times, Charity: Water, and Planned Parenthood. She is an exotic dancer, storyteller, and creator of Divine Mag – a zine that celebrates the intersection of art, sex and self love. She loves selfies and hates Nazis.

Custom Letters > Canned Type Every job is another chance to create custom letterforms either from scratch or by adapting existing typefaces. Let designer and illustrator Stefan Bucher take you on a 400-second tour of some of his most successful custom lettering projects, from the Saks Yeti to his film titles and record covers to the mural at his future perfect time travel retrospective “Everything Is Going Exactly As Planned.”

Stefan G. Bucher is the man behind 344lovesyou.com and dailymonster.com. He has created designs for David Hockney, Judd Apatow, Saks Fifth Avenue, and NASA’s Jet Propulsion Laboratory. He designed the titles for the films "The Fall," “Immortals” and “Mirror, Mirror,” and the author of several books, including the best-selling “344 Questions: The Creative Person's Do-It-Yourself Guide to Insight, Survival, and Artistic Fulfillment.” He is an ADC Young Gun.

Hand Lettering x Happy Brain Mental health and hand lettering; what do they have in common? More than you might think! Krislam will share with us her personal struggles with depression and anxiety and how hand lettering and the mindfulness it requires helped to restore peace in her daily life. Through this new-found passion, Krislam was inspired to create "Happy Brain: A 30-day Hand Lettering Challenge" to encourage others who struggle with mental clarity. She shares her passion through teaching hand lettering workshops and hopes that others will discover more peace of mind, or even uncover an untapped talent!

Krislam Chin is a graphic designer based in Downtown Los Angeles. She currently works as the Graphic Designer of Internal Communications at TechStyle Fashion Group, where she oversees the creative direction for global corporate communications and elevates internal branding through innovation and strategic design.

Creating Custom Type For over a decade year, our studio has been creating custom type for logos and various design projects. In this presentation, Christopher will explore several of Kneadle’s recent projects and our process beginning with the project brief, then research and brainstorming, sketches, and finally examining the completed artwork. We will discuss how to navigate through various explorations and possibilities, how to decide on an appropriate direction, and ultimately how to produce and refine the final artwork. Some of the interesting challenges that crop up along the way – both creatively and in working with clients, actually end up being an integral part the process.

Christopher DeCaro is the creative director at Kneadle, a creative agency located in Orange County, California. He has been working in the design industry for twenty years and maintains a healthy typographic obsession. When he is not working at his studio, he enjoys contributing to his local AIGA chapter and teaching at Chapman University.

Toys & Type We were all once children. And, we played with toys. Was it a Barbie? A View Master? Or maybe an extensive collection of Hot Wheels. Toys allowed us to create fantastical worlds any given day of the week. If it weren’t for typography…some of these worlds might not come alive or be as memorable. Vanessa will guide you down a path of how typography in toy packaging is so integral to the lives of toys.

Vanessa Dewey is an award-winning Downtown Los Angeles-based designer who champions development and creative endeavors at Mattel. She is a co-founded Mattel’s first internal speaker series, ReFuel, sits on the Board of Directors for AIGA Los Angeles and collaborates on AIGA’s National InHouse Initiative steering committee. She recently joined the LA Design Festival Board of Directors and the LA Ambassador Committee for the NYC-based group Ladies Get Paid.

Free Fallin' Using Tom Petty's "Free Fallin'" as inspiration, Tim will take you on a tour of the signage and type found throughout the San Fernando Valley of Los Angeles. We'll begin at the edge of Hollywood, moving west down Ventura Boulevard and ending when we hit the Galleria, all while traveling along a path Petty would have taken to the Valley studio to record the song. We'll discover a large number of local business type crimes that will break a good girl's heart, but those bad boys won't keep us from uncovering some hidden gems along the way.

Tim Hankins is the Creative Director at Laurel & Wolf, an online interior design company. He is responsible for the company’s brand and creative vision through design, photography, film and digital applications. Tim is a multidisciplinary designer of both physical and digital products with interests spanning art, music, film, games and technology.

4 Things I Learned Designing User Interfaces for VR at Disney When it comes to design, one can never get away from typography, and when it comes to typography in space, virtual or real — it’s all about the readability and communication. James will talk about specifics of typography and how its best applied in a virtual reality environment, its relationship to users and the cone of focus and other revelations learned while designing user interfaces for Virtual Reality at Disney.

James Hsu wanted to become a cat when he grew up. When he found out that was not a thing, he began pursuing a career in design. With his background in graphic design, marketing, and art history he’s led design efforts on teams for Disney, Ubisoft, and Live Nation. He spends a lot of time thinking about design solutions, zombie apocalypse survival, and how the two would ever overlap.

Why I Hate Comic Sans a Little Less We’ve read, reread, and read once again (just to make sure) the known rules of typography. We can set lines at proper length, text at proper size, and add just enough leading to find balance. All in the name of good legibility. Or readability. But for whom? Up to 20% of the population has a reading disability. Aging populations have aging eyes. Looking at new studies, we can learn a bit more about how to address these challenges and what to question about the current rules of typography.

Patrick Fredrickson develops and produces engaging, storytelling environments to enhance visitor experiences and public spaces. He has worked with and lead multidisciplinary design teams to develop the signage, environmental graphics, interpretive materials, and furniture necessary for unique physical and digital experiences. As Project Director for Altitude Design Office, he is furthering these skills through the development of unique signage, wayfinding, and branded environments.

The Typography of Bling Everyday, humans communicate cultural values, affiliations, and aspirations through adornment. Chests, hands, teeth, even products that serve as identity proxies, such as cars, can be our message boards and megaphones for transmitting our identities to others. The Typography of Bling explores these letter forms: from delicate, golden scripts to heavy block texts, jewelry worked into glyph form serves as identifying markers for groups across the cultural spectrum. This talk will survey typography as identity and cultural marker, all while trying to shade our eyes from the wearers’ shine.

Ana Monroe earned her A.B. from Columbia University, New York. She began her design career in Production Design before earning her MFA - STEM from Art Center College of Design. She currently serves as a Service Designer for The Lab at OPM and the Veterans Experience Office, Department of Veterans Affairs. Yes, her hair really is gray, but, no, she has no idea why.

Bold and Loud: The Vernacular of Typography as Seen Through the Lens of the Urban Culture of Protests Recently seen on the streets across the nation, one can’t ignore the vital role typography has played in shaping our socio-political commentary. From the widespread women’s march to protests addressing the refugee ban at LAX, the vernacular of typography has become prominently louder and bolder. Shaping the voices of resistance and frustration. Less about the image and more focus on the message, posters across the streets have become specifically about the phrases and words. From hand-lettered to typeset a display of self-expression could be seen. One can’t help but reference in parallel the energy of streets of the 1960’s.

Maece Seirafi is the founder and designer behind MSD studio, focusing creative strategy and branding based in Los Angeles. In 2005 she graduated from Otis College of Art and Design with a BFA in Communication Arts. After an extensive Type Design class with the late type designer Leah Hoffmitz, bilingual identities in typography furthered her interest to pursue her MFA at the Graphic Design program at the California Institute of the Arts in 2007. Maece continues to explore the nuances of latin and non-latin typography through her identity projects with clients.

Typesetting Weaponry for the Corporate Trenches Surviving in graphic design is frequently about navigating minefields of visual guesstimating, snap judgements and a culture of apathy passed down from corporate generation to generation. As designer soldiers fight their daily battles in the war against bad typesetting, they have to forgo some difficult losses of integrity. According to Michael, better type lies in two areas; your strategy and your arsenal. In this talk, he will present some tactics that will help you defend against enemies of the reading experience.

Michael Stinson is a cofounder of TypeEd, the Creative Director at Ramp Creative and the typography instructor at Laguna College of Art + Design (LCAD). With over 20 years in the field of design, his identity and annual report work has been recognized by CommArts, Mohawk Paper, TDC, and more. Conversely, he’s served on the juries for the Ad Club, Graphis, the One Show Design and the Young Ones. In 2008, Michael was named as one of Graphic Design USA’s “People to Watch.”