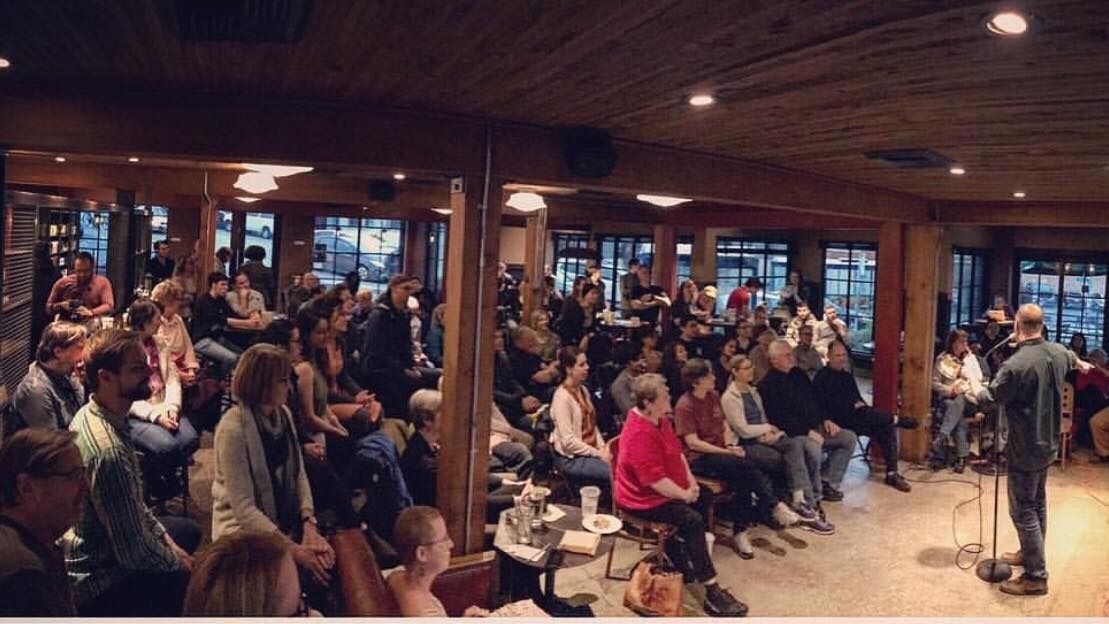 This month's theme is one we did three years ago but I was inspired to bring it back because one of our tellers, Nathan Vass, just gave a wonderful TED talk on the importance of strangers in our lives. We talk a lot about stranger danger but I think if we look closely at our daily interactions we'll find that most strangers are polite and sometimes very kind. Nathan says that we often remember the kindnesses of strangers because it's so unexpected. We know our friends and family will be there for us, but when a stranger helps us it reinforces our faith in humanity. I think we need that right now.

I'd love to hear some stories about a time when a stranger came into your life. Below is the story I wrote three years ago for this theme. I'm posting it again because the couple whose wedding I wrote about just announced they're expecting their first child.

As much as I enjoy being onstage I'm pretty quiet when I'm around strangers. It's almost impossible for me to start conversations with people I don't know and even harder to keep those conversations going. Nothing in my life seems easy to explain and the harder I try the worse I feel. I’m only comfortable when I'm being uncomfortably honest and that's not something most people want to hear over cocktails or a Costco veggie platter. I couldn't care less about Seahawks, traffic, or Game of Thrones so I'm pretty useless at most gatherings.

For some reason, though, I keep getting invited to things and I'm running out of diseases to pretend that I have. For dinner parties, I usually go with shingles but people are starting to catch on. For the last couple of birthday invites, I faked bird flu but that got messed up when someone went on WebMD and found that I was the first person in North America to get it. I feel bad that my friends must think I'm at death's door but if there's anything worse than being alone at home it's being alone at a party.

But then six months ago my friend Angela invited me to her wedding and she knows all my tricks. She's also a therapist so I can't even claim social anxiety. She'll just say, "Do you still have that Lorazepam the doctor gave you?" She can read my silences even better than my spoken lies.

I should have started researching exotic illnesses as soon as she told me what the theme of the ceremony was. Everyone was supposed to come dressed as their greatest fear. My first thought was that I should go naked but that was probably more her greatest fear than mine.

How in the world was I supposed to narrow this down to just one life-altering irrational fear? I might be able to get it down to 12 or 15 greatest hits but then the evening turns into a Cher concert with me changing costumes every 10 minutes.

Meetup only allows me a certain number of characters. Click here to read the rest of the story
https://freshgroundstories.com/2019/05/20/strangers-stories-of-chance-encounters/