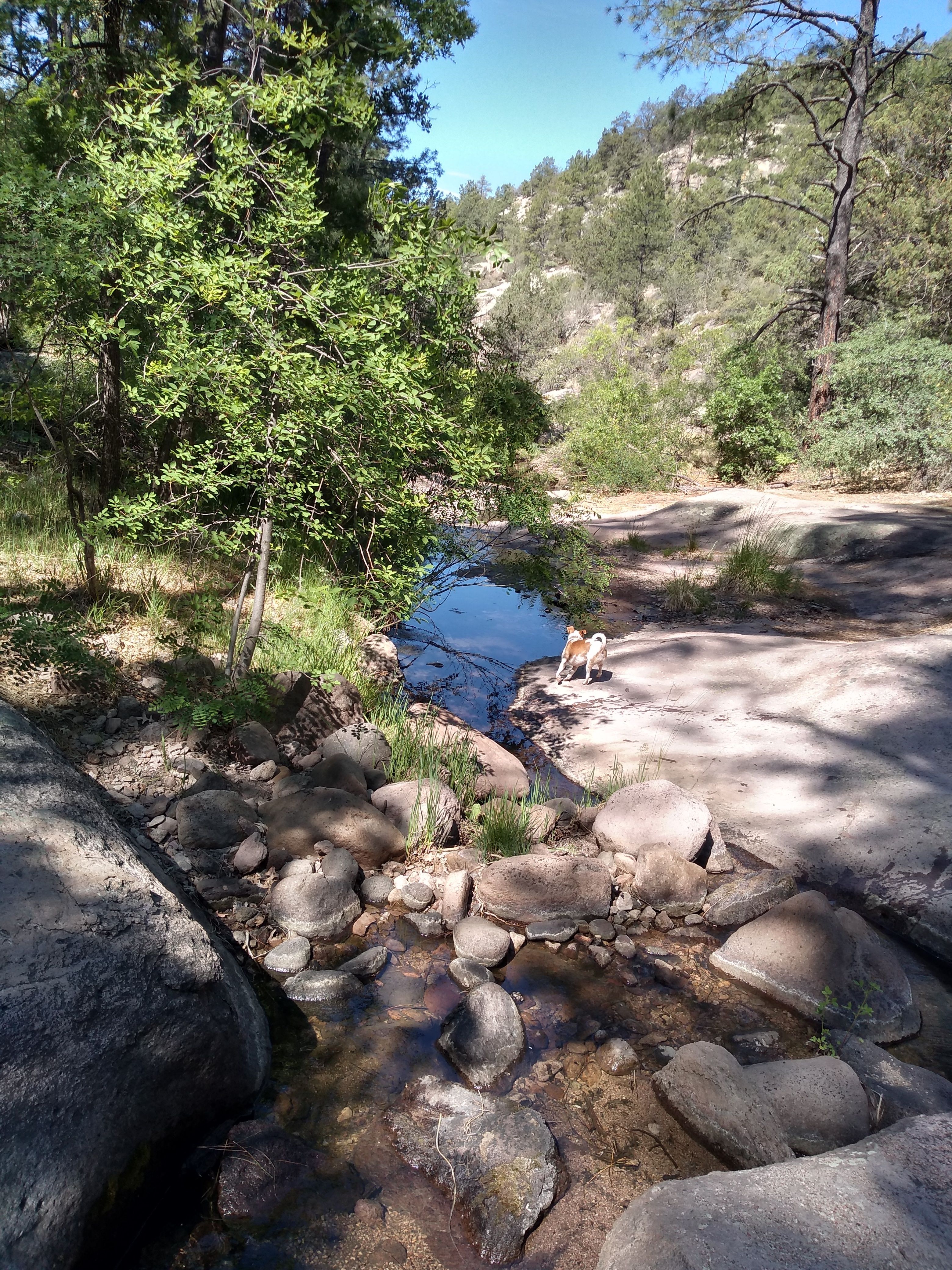 Last Saturday a flag was hoisted up on the Needle. Did it survive Sunday's wind storm? Let's find it out!

The Organ Mountain 'needles' resemble the pipes of a pipe organ, and hence the name. 'The Needle' is the highest of all the 'needles'. It majestically overlooks all the other peaks of the Organs from above, like an ancient monarch, inviolable, terrifying, ruling over all the dignified lords (Organ peaks), surveying his expansive kingdom that is the vast valleys of the east and west, demanding all due respect from all his subjects.

Geologically, the northern part of the Organs (where the Needle is) is formed with tertiary granite, while the southern part (where the Peak is) igneous rock. They are largely divided by an east-west line along Fillmore Canyon. The rock of the southern part is purplish-gray, and the northern reddish-yellowish-white. While the southern part is already dramatic enough, the northern part looks like something some giant immortal hacked out, in a fury, all the rock pieces with a humongous hatchet, with all the edges never rubbed off. Thus the cliffs are all vertical, go from the ground to the ‘needles’ without any breaks, like the giant did a clean job of it with cutting. And if not exactly perpendicular to the ground, they definitely look that way. The distinctive differences of the color and formation of the northern and southern parts of the Organs make you wonder how that could happen.

Needle trail passes by Yellow Rock on the left hand side, which is a rock formation approximately 500’ wide, a bit over 100’ high, with a very distinguishable bright yellow color. There’s a very narrow passage in the Yellow Rock, something interesting enough deserved to be a hiking destination by itself (~4 miles roundtrip, ~1000’ elevation gain).
After Yellow Rock, the trail becomes very steep, and the steepness sustained all the way to the Needle. The first steep climbing is on and under a rock formation called the Gray Prominence, which is the same rock formation of the southern part of the Organs. It looks like a splash-over from the creation of the southern Organs.

If the Gray Prominence was an unintended, accidental spill-off-from-the-utensil, then the Yellow Rock just came out from nowhere. These two are the only orderlessnesses of the orderness of the whole northern Needles Range.

The highest point of the Needle trail on the Gray Prominence is Juniper Saddle, named after the cut-down juniper with the diameter of the trunk 4-5 feet.

Getting to the Juniper Saddle is by itself a very strenuous endeavor, and as a result of that, most hikers will take a well deserved break. Look down west at the Yellow Rock, and the puny little rock mound called ‘A’ Mountain, and the town Las Cruces to the far west in the Rio Grande river valley. Look towards south, the mighty rock cliffs on the other side of Fillmore Canyon, the pines, the peaks, including The Organ Peak. Turn around, face east, there is the gigantic, sheer rock mass shot straight into the blue sky. The highest point of this mass, is the destination of this hike: The Needle. One would wonder, is it possible that there is a trail leading there?

The trail (that largely cannot be seen at this point) does get steeper and steeper, and, it should be said, relentless. Cut across the washed-out solid rock bed, ascend into The Dark Canyon, and thick oak groves, pines, huge gnarly alligator junipers, wild grape vines, and a hodgepodge of high desert vegetations rarely seen in any other places...

And of course, there is no lack of rattlesnakes of the rocky mountains of the desert. Unfortunately, they are still sleeping their long, deep ‘beauty sleep’ this time of year. The chance of getting enchanted by one of them is none. A minor disappointment at that.
The end of the nonstop Dark Canyon climbing leads to the second saddle. From the second saddle, The Needle is minutes away. That is, if you still have the same strong willpower as you had at the beginning of this ordeal, plus some freshly generated mojo … Have you noticed that your burning calves are conveniently not mentioned here?...

From the Needle, you look around, literally, you are looking down at the whole world, and then, you pause, and marvel at The Needle itself, you will understand why people keep climbing this thing.

Almost every single hiker in this area must have marveled at the Organs, especially The Needle, from, afar at the least, the Las Cruces side. Well, get on the hike.
You don’t have to be a super-hiker to do the Needle Trail. And you don’t have to finish the whole trail to have a rewarding hike. The attractive Yellow Rock, the impressive Juniper Saddle, or turn around anywhere you want to turn around, make it a very satisfying hike, and leave something for future Needle trail endeavors. The Needle trail is a pretty beaten one trail, without many misleading side forks, which makes ‘hiking your own hike’ much easier.

Meet us at Milagro Coffee at 0800, or La Cueva Picnic Area Parking Lot at 0820. Any questions call or text[masked]