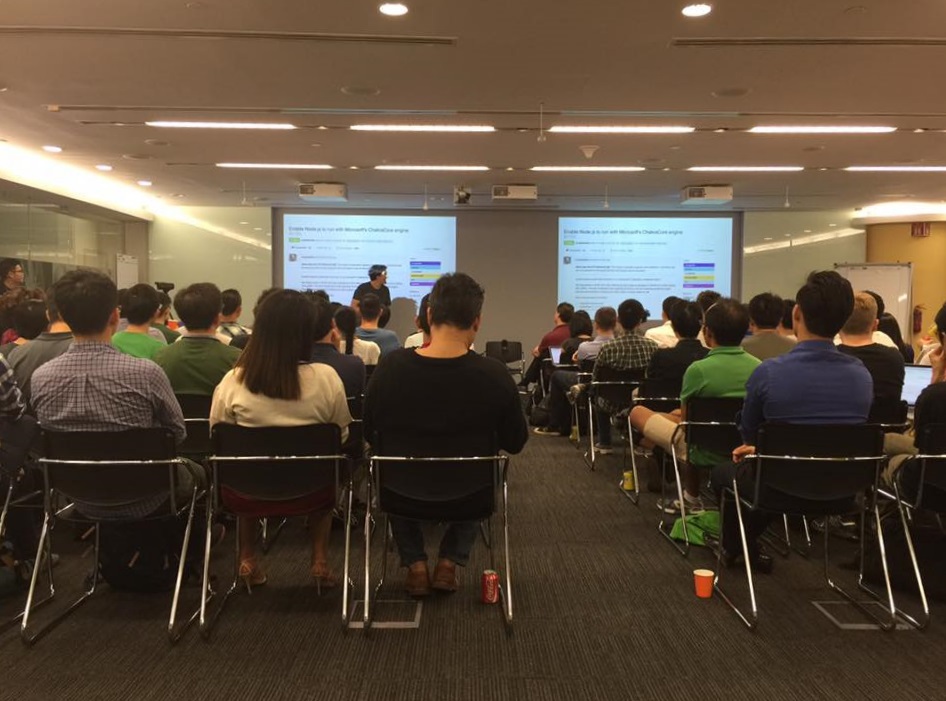 The IETF 100 meeting in Singapore brings many visiting technical experts to our fair city. On the sidelines of intense standards discussions, this WebRTC event is part of a roadshow also visiting Seoul and Tokyo. Come meet, and learn from, the WebRTC experts.

It is of utmost importance for the future success of WebRTC to ensure that interoperability is operational between web browsers and any WebRTC-compliant client. To be guaranteed as operational and effective, interoperability must be tested extensively by establishing WebRTC data and media connections between different web browsers running on different devices and operating systems.

I will present a comprehensive view of the numerous testing challenges researchers have faced before arriving at the first release candidate of the WebRTC specifications. More specifically, we touch on WebRTC testing at different levels: W3C JS API compliance, stand-alone web application testing, WebRTC security testing, P2P network and ICE testing, synchronous and asymmetric testing and eventually full global interoperability testing. I will show at each level how WebRTC has been pushing boundaries of existing test suites, and triggering new developments both for the standards, and for the industry.

While WebRTC was conceived as peer-to-peer, it’s actually quite common to have one of the peers in the communication be a server side application, especially when complex scenarios are envisaged, which may or may not involve legacy technologies not compliant with the WebRTC specification itself.

One of the most popular solutions for such a server side WebRTC solution is Janus, an open source WebRTC server implemented by Meetecho. Janus was conceived as modular, with pluggable modules to handle different transports for its API, and more importantly for the media management, thus basically acting as a “general purpose” WebRTC solution. As such, it is currently used by several people and companies to empower their WebRTC applications, in scenarios that range from traditional applications like web conferencing, contact centers and e-learning, to more innovative contexts like videogame streaming and IoT.

The presentation will introduce the Janus architecture, its features, and how it can be used, deployed, monitored and troubleshooted, plus a quick view on the most recently added functionality. An overview on some of the existing Janus deployments will be provided as well, including details on how Janus currently serves the IETF remote participation services.

## AllThingsRTC.org - a new voice for the real-time communications industry

The early WebRTC startups have all been acquired, the standard is close to wrapping up (for version 1.0 at least), WebRTC support in some form is in every existing telecom platform, and the technology has made its way into well-known consumer products such as Amazon Mayday and FaceBook Video and Voice Chat. But while conference attendance has been dwindling, I still hear the same questions: “but how do I get started?” and “where should I go if I need help?”.

AllThingsRTC.org is the beginning of a broader project dedicated to those who are excited by the thought of what can be accomplished using real-time communications technologies such as WebRTC, to those who have the beginnings of a dream but no idea where to start or where to go for more help. Do we intend to replace any/all of the existing related sites? Not at all. In fact, we are happy to point our readers to whatever resources they need. That’s why we seek out articles by and interviews of those in this industry who are the experts, those who consult, those who provide products that might meet our readers’ needs. But always, always, always with a focus on explaining in detail why what they offer matters.

## Applications of WebRTC In Gaming

Evasyst was founded with the intention of making video-streaming and playback a single application experience. eSports broadcasting exploded into the public lexicon in the United States with Amazon’s 2014 purchase of Twitch, and while the audiences were huge, the number of casual and online-competitive gamers still dwarfs the number of people broadcasting their game-play for the world to see.

Social Media has already proven that users prefer to share content with a select number of IRL peers, but game-play was typically limited to coop VoIP and Chat solutions. When Evasyst started working with WebRTC screen sharing was, and is still considered a tool primarily for enterprise users to collaborate over power-point presentations and documents. At the same time consumer video-calls are quickly becoming the norm on many platforms. Our search for solution quickly led us to WebRTC, a technology that for all of its promises remains stubbornly “isolated” in the “web-browser” in the minds of most engineers and technologists. Evasyst’s search for solution ultimately lead to a unique application of WebRTC.org’s implementation of WebRTC via libWebRTC.

However, with the gaming and social media industry’s interest in video-streaming exploding, competitors are catching up and the variety of applications of WebRTC in gaming are appearing more quickly than ever before.

This talk will explore the ideations of the biggest players in gaming and streaming technology, as well as their approach and the known unknowns of leveraging WebRTC outside of the web-browser.

Dr Alex Gouaillard is CEO and Founder of CoSMo Software, a WebRTC consulting and tooling company. Winner of 3 WebRTC Conference and Expo Industrial Awards (2013~2014), as well as 1 WebRTC Pioneer Award (2014), Co-Leader of the WebRTC-in-Webkit Project with Ericsson R&D (2015), he is regarded as one of the pioneers of Web Real-Time Communication (WebRTC).

Invited Expert of the W3C WebRTC Working Group, he is in charge of the WebRTC test suite, and browsers interoperability. Active member of IETF, he participates to the definition of all WebRTC specifications, and some more, like PERC. He is also co-chair of the IMTC WebRTC Interoperability Group.

Dr. Alex holds two PhDs from INSA, France, and KEIO University, Japan. He has deep experience in communications, signal and image processing. In the past, he has established and led successful research groups at Caltech University, Harvard University, and the Singaporean Agency for Science, Technology and Research. Dr. Alex was also involved in several innovative startups in Europe, North America, and APAC. He speaks to some level French, German, English, Japanese, Chinese, Thai and Filipino, all with a French accent.

Lorenzo Miniero is the chairman and co-founder of Meetecho, a company providing consulting services on everything related to real-time multimedia, while also regularly providing streaming and remote participation services for well known events around the world (e.g., IETF and ACM).

Lorenzo received his degree and Ph.D. at the Computer Science Department of the University of Napoli Federico II, where he started working on multimedia conferencing and met the colleagues with whom he co-founded Meetecho as an academic spin-off.

He is an active contributor to the Internet Engineering Task Force (IETF) standardization activities, especially in the framework of real-time multimedia applications.

He is most known as the author of the Janus WebRTC Server, an open source WebRTC server-side implementation.

Dr. Burnett has almost 20 years of experience in Web and Internet standards. As Principal for StandardsPlay, his consulting firm, Dan helps companies play the standards game, both advising clients in how they can strengthen their brand and market positions through standards leadership and representing them directly in organizations such as W3C and the IETF when appropriate.

Dan's introduction to standards came while a researcher in automatic speech recognition technology at Nuance, well-known worldwide for its voice recognition technology. Beginning when the World Wide Web Consortium, the organization responsible for HTML, was only 5 years old, Dan co-created VoiceXML, the still-reigning standard for Interactive Voice Response systems, receiving two Speech Luminary awards from SpeechTech magazine for his contributions to the industry. Through roles at Vocalocity, Voxeo, Tropo, and Aspect, Dan continued to lead in the development of VoiceXML and its related SRGS, SSML, SISR, and other standards.

While at Voxeo, Tropo, and Aspect, Dan's standards focus gradually added and then transitioned to the development of WebRTC, the JavaScript APIs in major web browsers that provide plugin-free audio, video, and real-time peer-to-peer communications. Dan is the initial and longest-running editor of the W3C's WebRTC and Media Capture and Streams standards specifications. A frequent speaker at conferences, Dan is also co-author of the most popular book on WebRTC.

Dan's newest project is the nascent work on Verifiable Claims at W3C, a broadly-backed effort to standardize self-sovereign, cryptographically-verifiable claims/credentials/attestations that can fully replace the need for centralized digital identifiers online. A past Board member of the VoiceXML Forum, Dan is currently serving as a Director of the IEEE-ISTO. Dan has also recently started AllThingsRTC.org, a site dedicated to the real-time communications industry.

Evasyst partners with collegian and professional eSports clubs and programs to help gamers, coaches and analysts game more effectively. Today Evasyst has raised over $2 million in venture capital funding and has over 100 collegiate eSports partners.

Jordan holds a BS in Computer Science and Computer Engineering from the University of Colorado, Boulder. Jordan has worked at 6+ start-up companies in the Denver/Boulder, Colorado region, San Francisco/Bay Area (Silicon Valley), and Southern California, as well as Hong Kong, PRC., and Mumbai, India.

These start-ups focused on a variety of products and services such as Enterprise CRM (Salesforce), sports / entertainment social media presence, cryptocurrency/blockchain, venture capital, as well as NGO/NP organizations.

An interest in high-frequency trading and GPU accelerator technology lead to an interest in video applications as well as cryptocurrency/blockchain technology. Jordan hopes to continue his career connecting engineers and technologists around the globe through open-source software.